A disc that can store 500 gigabytes (GB) of data, equivalent to 100 DVDs, has been unveiled by General Electric. 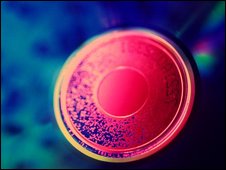 Optical discs have been a leading storage solution for decades

The micro-holographic disc, which is the same size as existing DVD discs, is aimed at the archive industry.

But the company believes it can eventually be used in the consumer market place and home players.

Blu-ray discs, which are used to store high definition movies and games, can currently hold between 25GB and 50GB.

Micro-holographic discs can store more data than DVDs or Blu-ray because they store information on the disc in three dimensions, rather than just pits on the surface of the disc.

The challenge for this area of technology has been to increase the reflectivity of the holograms that are stored on the discs so that players can be used to both read and write to the discs.

Brian Lawrence, who leads GE's Holographic Storage said on the GE Research blog: "Very recently, the team at GE has made dramatic improvements in the materials enabling significant increases in the amount of light that can be reflected by the holograms."

The higher reflectivity that can be achieved, the more capacity for the disc. While the technology is still in the laboratory stage, GE believes it will take off because players can be built are backwards compatible with existing DVD and Blu-ray technologies.

In a statement the firm said: "The hardware and formats are so similar to current optical storage technology that the micro-holographic players will enable consumers to play back their CDs, DVDs and Blu-ray discs."

''GE's breakthrough is a huge step toward bringing our next generation holographic storage technology to the everyday consumer,'' said Mr Lawrence in a statement.

He added: "The day when you can store your entire high definition movie collection on one disc and support high resolution formats like 3-D television is closer than you think.''

Micro-holographic technology has been one of the leading areas of research for storage experts for decades. Discs are seen as a reliable and effective form of storage and are both consumer and retail friendly.

However, General Electric will need to work with hardware manufacturers if it is to bring the technology to the consumer market.

The relatively modest adoption of Blu-ray discs sales globally might be an issue with some companies who believe digital distribution and cloud computing is the long-term answer to content delivery and storage.

"This is truly a breakthrough in the development of the materials that are so critical to ultimately bringing holographic storage to the everyday consumer," said Mr Lawrence.