Dave Arneson, one of the co-creators of the Dungeons & Dragons fantasy role-play game, has died of cancer at 61 in a hospice in St Paul, Minnesota. 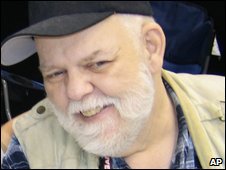 Arneson taught classes in game design in his later years

His two-year battle with the disease ended on Tuesday when he passed away peacefully, his daughter said.

Arneson created the game famous for its oddly shaped dice in 1974 along with the late Gary Gygax.

"The biggest thing about my dad's world is he wanted people to have fun in life," said his daughter Malia.

Arneson and Gygax developed D&D using medieval characters and mythical creatures and it was a worldwide hit, particularly among teenage boys.

It eventually was turned into video games, books and films.

"I think we get distracted by the everyday things you have to do in life and we forget to enjoy life and have fun," Malia Weinhagen told the Associated Press.

"But my dad never did. He just wanted people to have fun."

D&D, described by AP as "the quintessential geek pastime", spawned copycat games and later inspired a whole genre of computer games that is still growing in popularity.

"[Arneson] developed many of the fundamental ideas of role-playing: that each player controls just one hero, that heroes gain power through adventures and that personality is as important as combat prowess," said a statement from Wizards of the Coast, which produces D&D.

The company noted that Blackmoor, a game Arneson had been developing before D&D, was the "first-ever role-playing campaign and the prototype for all [role-playing game] campaigns since".

Arneson met Gygax, who died in March of last year, at a games convention in 1969.

He is survived by his daughter and two grandchildren.

Toward the bottom of the page there is a spot for Send your tributes to Arneson and Gygax using the form below.