PEORIA, Ariz. — At first, playing the Nintendo Wii was merely a way for Padres relief pitcher Heath Bell to engage in another fun activity with his three children.

That changed pretty quickly, though. 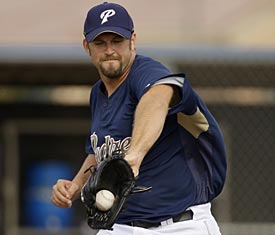 Heath Bell was chagrined when the Wii Fit declared that he was obese. (Charlie Riedel/AP)

"It started out that way, but then I tried the yoga and the strength training and I found that I was sweating every single time. I figured, 'Why not do this once in a while?' So I began playing and my wife and kids thought I was crazy because I was sweating so much."

Bell said Monday that his workouts with the Nintendo Wii Fit were a big reason why he dropped about 25 pounds during the offseason and why he considers himself in "tip-top" shape as he prepares for his role as closer now that icon Trevor Hoffman has moved to Milwaukee.

As for the Nintendo Wii, Bell often played that with his wife and children at their home in Florida. It wasn't until the Bells purchased the Wii Fit game and board that he started doing the exercises that helped him get in what he considers the best shape he's been in since joining the Padres in 2007.

Standing on the Wii Fit board for the first time, Bell's character — one he created with a goatee and spiked hair — was shown as "obese," as the board actually weighs the player and tracks his or her progress or lack thereof.

"That was disappointing," he said. "It weighed me the first time and said I was obese. That sucked. I lost a couple of pounds and it said I was still obese. I guess it was an eye-opener."

Bell said he gained the most from the strength training, balance and yoga games that are part of the Wii Fit program.

"It really works you out," Bell said. "For the average person looking to lose weight, this is the way to do it."

Bell's wife, Nicole, considers Heath Bell her "fourth child" and isn't the least bit surprised he took to the Wii Fit the way he has.

"I never underestimate Heath; he never ceases to amaze me with his quirkiness," Nicole Bell said. "He's used it [Wii Fit] more than me. I can see him drenched in sweat doing the hula hoop. He's ready enjoyed it."

Others have noticed. San Diego manager Bud Black said Saturday that Bell looked like he "had lost a few pounds."

Bell, who was 6-6 with a 3.58 ERA in 74 games last season, is stepping into an important role this season as Hoffman, the Major League career saves leader, is now playing for the Brewers.

"I just feel like I'm in tip-top shape. I'm 31 now, I feel like I'm energized and I feel like I recover faster, like I have 10 times more energy. Playing the Wii was good. It was fun and I was working out while I was having fun," Bell said.

Corey Brock is a reporter for MLB.com. This story was not subject to the approval of Major League Baseball or its clubs.