Red hair faces all round

Surfers attempting to visit Microsoft's Irish website via Microsoft.ie on Tuesday morning were greeted with a defaced page instead.

Hackers sprayed digital graffiti bragging that Microsoft Ireland had been hacked by the previously unknown "Terrorist crew". The message, which contains greetings to other hackers, as is the custom with defaced websites, did not arise through a direct attack on Microsoft's site itself. 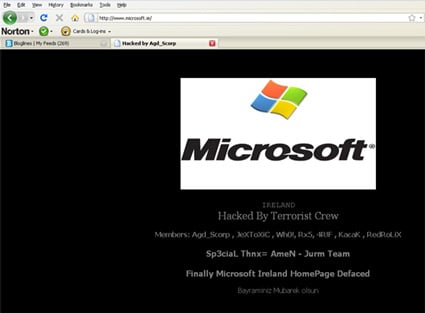 Rather, the miscreants succeeded in somehow re-routing the redirection page from Microsoft.ie to the main site.

Microsoft fixed the issue, which existed for a few hours, this morning. The software giant promised to improved its security to prevent a repetition of the incident.

"We resolved the re-direct issue very quickly and the Microsoft Ireland site (and other Microsoft sites) were not affected by this incident. We take these incidents very seriously and we are working with the third party to ensure this issue isn't repeated. We have also informed the relevant authorities," he added. ®